Thought this was clever! 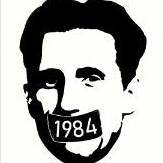 Made bone-in pork chops the other night from the local grocery store. They have killer pork chops, some of the best I've ever had.  Just seasoned with some pork butt rub igot as a gift that seems good