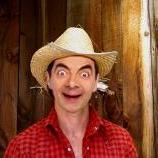 Me thinks the Metoo movement is getting out of hand.